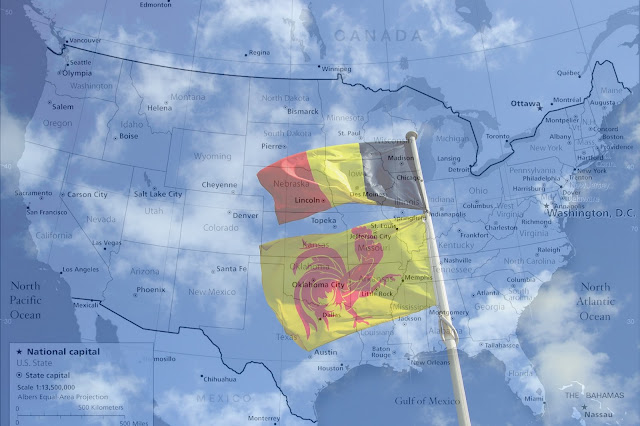 Before I came to Belgium, I was told by many people that the culture is not drastically different. There are a few small differences, but on the whole, it's not really a "culture shock". After more than 8 months here, I think that I can agree to that statement as well. The Belgian culture is not extremely different to life in the United States, but there are a few little things that make it unique. There were a few times, especially during the beginning, where I thought to myself, "we don't really do that." But that is the best part of the exchange, in my opinion!
Here are just a few examples:

1. BREAD. BREAD. BREAD. Belgians eat so much bread! In my host family, we eat it for breakfast, lunch, and (sometimes) dinner. For breakfast, we eat bread with jam or chocolate spread. Normally, we have warm milk with it as well (that was strange for me at the beginning because I used to never drink plain milk). For lunch, we make little sandwiches called a "tartine". They are different than sandwiches because they are usually just one piece of meat or one piece of cheese between slices of bread, instead of with the other toppings that a sandwich usually has. Don't get me wrong, bread is great! But it was just a lifestyle change that I had to adapt to when I arrived here in Belgium. I'm sure that I'm going to go back to the United States, I'm going to eat all of the bread in the house and my parents will be really confused.

2. School is more relaxed, but at the same time, more strict. I don't really know how to explain it. It's more relaxed in the way that if you don't have a class at the end of beginning of the day, you can arrive later/leave earlier. Also, if a teacher is not there, you just don't have class. In the United States, there is always a subsitute teacher and you have to stay in school for the entire school day. However, I find that school in Belgium is much more intense. There is almost always homework or a test to study for. There were some times in the U.S. where I could go for an entire week or two without doing homework or studying, because I would do all of my homework and studying at school. In addition, here in Belgium, there is almost no choice in what classes you can take or the level of difficulty. Everyone must take math, science, languages, etc. In the U.S., many people can take advanced classes or even graduate early if they arrange their schedules accordingly. I love Belgium, but school is something I prefer in the United States for the reason that there is more liberty in the choice of your education.

3. In Belgium, the teenagers normally don't have jobs. That was one thing that was pretty odd for me right away. I have had a job since I was fourteen years old (working at an ice cream stand, nonetheless...) and because of that, I feel like I grew up to be a pretty independent person. While I agree that Belgian teenagers are independent, it was just rather shocking to me that most of their parents give them money for things such as going out with friends, their cars, buying clothes, etc. Perhaps teens in the U.S. do that as well, but for me, it's a change to rely on parents in that sense (not that it's a bad thing, it's just a change)! Additionally, most of the teenagers in Belgium go home after school and study, while a lot of teenagers in the United States go to their jobs after school.

4. A lot of emphasis is placed on drinks. While Belgium is a country known worldwide for having the best beer, I don't necessarily mean alcoholic drinks. I mean just the idea of a beverage in general. If you visit someone's house, they will offer you a drink. If you go to a sports game, there is a bar to buy drinks. Sometimes if people are bored, they'll just go out and buy a coke or a glass of water at a cafe. Beverages were never something that I really thought a lot about in the United States, so that was something new for me when I arrived to Belgium.

5. Public transportation is awesome and easy to use! I take the public bus to school every day, which is actually something that I never did before I came to Belgium. In the United States, I would either take the school bus or drive my car to school. I also take the train at least once a month here in Belgium, and it's not too expensive if you buy this thing called a GoPass (it's a special "ticket" for students where you only pay 5 euros a trip...to anywhere in Belgium that you want)! I actually love going on public transportation if I have my iPod along with me, so I don't mind taking it at all. Personally, I think that is one thing that the United States should work on improving a little bit. Public transportation is the way to go. Belgium's got that one down!
Posted by Skyler at 12:09 PM